We do love predicting the future, don’t we? For a supposedly analytically and practical group of people, technology bloggers, writers and manufacturers are super-keen on looking into the depths of our crystal ball and trying to see what technological development is just around the corner. 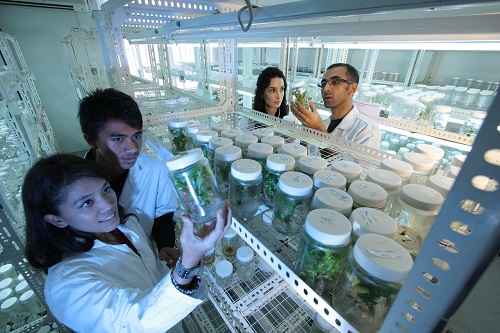 For the manufacturers, this is actually quite an important exercise, if they want to stay ahead of the competition. So with half of 2014 already disappearing in our rear-view mirror and 2015 just months away, what are our predictions for the coming year’s technological advances?

The world is shrinking, and now we’re miniaturising technology to fit. Nanotechnology has so far stayed in the annals of science fiction to a large extent, but behind the scenes teams of R&D specialists are working to develop smaller and smaller gadgets, particularly in the medical field. Currently, it’s being used in cosmetics to enhance the luminescence of the skin and to brighten colours. But this is just the tip of a (teeny-tiny) iceberg that could see everything from drugs delivered straight to the heart of cancerous cells by internal nano-drones through to molecular reconstruction of worn out joints such as hips or knees.

We’ve come a very long way since 1947, when American computer engineer Howard Aiken said that it would take no more than six computers to satisfy the computing needs of the United States (probably the worst prediction of modern times). Now, quantum computers are on the horizon. These use atoms and molecules to carry out processing functions, and could be significantly faster than current, silicon-based versions. 2015 could see the start of this revolution, and could be the year that Shrodinger’s Cat finally came out of the quantum box and into our homes and workplaces…

This is the big one for 2015. The CEA (Consumer Electronics Association) have announced that they will be focusing on sensor technology in next year’s CES. This will bring the leading motion technology developers together to showcase everything from motion recognition technology through to aerospace, automotive and medical use of sensors. We’re becoming more familiar with sensors in our everyday lives, from Siri and fitness trackers through to interactive toys and even robotics. 2015 could see a spotlight shone onto this sector of the industry.

#4 – The expansion of Biometrics

Biometrics has, up until now, been confined mainly to security applications. Basic biometrics have been around for a while now, but in 2015 we could see much more of it as it becomes part of our lives. Biometrics are already incorporated into passports, but you could see the use of technology included in driving licences and other official documentation to fight fraud and identity theft in particular.

This is one important technology that’s been hovering under the radar for a while now. However, R&D specialists such as Plastic Logic, who have been pioneering some of the most important FST advancements in recent years, believe that the time is almost ripe for FST to hit the market. It could revolutionize mobile technology such as tablet and smartphone designs, as well as making major impacts in the display and advertising industry.

Plastic Logic’s CEO Indro Mukerjee said recently: “Flexible electronics is a reality, already proven through the development and manufacture of plastic, bendable displays and sensors. For the first time a fully organic, plastic, flexible AMOLED demonstration has been achieved with a real industrial fabrication process. This marks the start of a revolution in wearable products, the next frontier in consumer electronics.”

Following on from FST, wearable technology is starting to make baby steps into the marketplace, but 2015 could see an explosion of new, innovative products. Smart-watches have had a bit of a stuttering start, with concerns that they simply don’t have a defined place in the market. But as developers let their imaginations run loose we could see a host of Kickstarter projects that could give the Samsung Galaxy a real run for its money.

SEO In Your Web Design

Does Your Business Need A New Content Marketing Strategy?

How Can You Reduce The Carbon Footprint Your Business’s Server Room?

5 Tricks To Learn From The Indian Startup – PortraitFlip