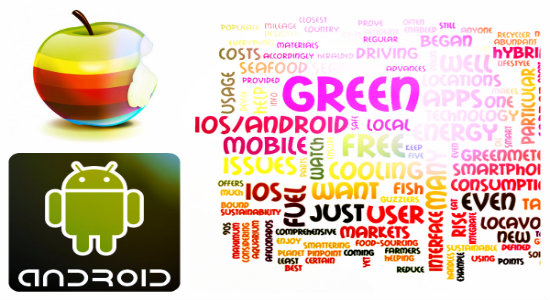 The dawn of the 21st century heralded not just major advances in technology, but a rise in awareness of green issues among much of the global populace. As more and more people began to take the planet’s welfare into account, many of these same people also began to adopt a greener lifestyle that was often aided by technology. For example, a number of people switched to hybrid vehicles rather than the old gas guzzlers that defined the 90s, and new forms of energy, such as solar panels, are on the rise. Even the tiny yet ubiquitous smartphone is helping the green cause in the form of mobile green apps.

Yes, the term “there’s an app for that” applies to green issues as well. Here are just five of some of the best on the market to help people cut their carbon footprint.

Heating and cooling makes up 50% of a home’s total energy cost. This app aims to curb those costs by allowing the user to integrate all of his or her home heating and cooling into one interface. The app is Wi-Fi enabled and tracks not only the user’s energy usage, but the outside weather as well. The app then adjusts the usage accordingly and can, according to some stats, save up to 24% on their heating and 21% on their cooling costs.

Locavore is a food-sourcing green app that should prove popular for anyone who wants to buy both healthy and local. The app tells users exactly what produce is fresh and in season at any particular moment and it provides pinpoint locations of nearby farmers markets and farms.

Those who aren’t driving a hybrid likely still would enjoy the ability to track fuel consumption. GreenMeter provides this ability using the accelerator of any iOS mobile device to keep track of oil and fuel consumption as well as carbon emissions. The feedback the green app provides allows users to adjust their driving habits to ensure they get the maximum mileage for the least amount of fuel.

Those who want to know more about green issues such as recycling can do so with the info – provided by Earth911 – on this green app. More than that, iRecycle offers a comprehensive database of recycling locations throughout the country. Those who want to recycle everything from paper to construction materials to auto parts can get the exact location of the recycler closest to them. The app even handles the sorting through one easy-to-use, icon-heavy interface.

For many people, a night out at the sushi bar is a regular occurrence. But green-minded seafood aficionados may want to start considering the sustainability of certain kinds of fish. Seafood Watch is an app designed by the Monterey Bay Aquarium that provides users with suggestions on which fish are abundant and safe to eat in a particular region. It even points the user in the direction of great, local seafood markets that offer sustainable product.

This is just a smattering of the many green apps on the market. And while all of the above can help smartphone users to be more environmentally conscious, there are bound to be even more apps in the coming months that take the idea of combining green and mobile to new and creative heights.

Scott Johnson is a tech blogger and iPhone aficionado. He writes on behalf of Protect Your Bubble iPhone insurance brand.

Must Have Accessories for Your Smartphone

Striking The Balance Between Speed And Security Online