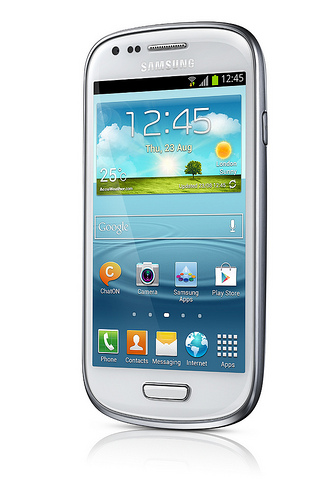 The phones that are classified as mid-range phones are often overlooked by those that are technologically savvy. Most consumers are interested in flagship phones like the iPhone 5. But, there are some mobile phones that are so unique and interesting that they temporarily turn the public’s attention away from the giant smart phones. The Samsung Galaxy S3 Mini is one of those unique mobile phones.

The Little Sibling of the Samsung Galaxy S3

The Galaxy S3 Mini is the perfect smaller model of the Galaxy S3. The Mini has a 4 inch touch screen; the S3 has a 4.8 inch touch screen. The Mini has a 1GHz Ericsson processor; the S3 has a 1.5 GHZ Snapdragon processor. Some of the S3’s also run on 1.4GHz Tegra 3. The cameras are also different between the two phones. The Galaxy S3 Mini has a 5 megapixel camera, whilst the S3 has an 8 megapixel camera. Other than these differences, these two phones are very similar. The added bonus that the Mini has over the S3 is that it operates on the latest Android 4.1 Jellybean operating system.

The Things That the Critics Are Upset About

The processing system of the Mini has also been the subject of attacks from critics. The dual core 1GHz processor does not sound very impressive, but there are other phones that are on the market that use the ST-Ericsson NovaThor and all of these phones perform at or above consumer’s expectations. The performances of these phones are not comparable of course to the Snapdragon S4; it is more in the same performance line as the Cortex A9. The NovaThor is used in the following phones:

All of these units have excelled at all the various tests they have been given.

The specs for the S3 Mini are not fascinating, and they do not need to be. The Android platform is usually tailored more for mid and lower range mobile phones, not high end models. Both the S3 and the S3 Mini can and will perform well in most every day circumstances, except maybe during extremely high internet usage. This is one time where a smaller resolution mobile phone may perform better because it can change frames faster than a higher resolution phone. The one thing that mobile phone users will realise with the Mini is that it is no different than its older brother, just like a mid-range laptop can perform just as well as a higher end laptop.

Do you think the Samsung Galaxy S3 Mini is better than the other mid-range smart phones on the market? Laura Ginn enjoys scouting for the best deals on mobile phones, and she searches for these prices on uSwitch.com, the UK’s leading price comparison website.

How to Start Your Own Mommy Blog?