Most people that get asked this question automatically default to the biggest manufacturers, such as Apple, Samsung, Nokia and HTC. It’s important to clarify the question and state that–I’m talking about all mobile phones, smartphone, feature phone and budget phone.Nokia had dominance in the mobile phone market for many years. In fact, they sold more phones than anyone else for over a decade in a row. 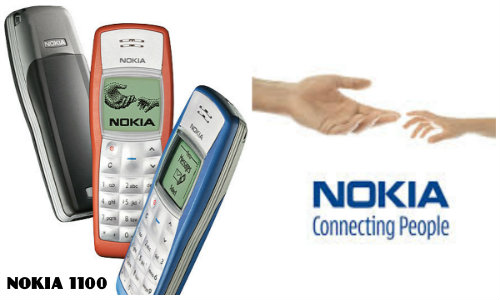 Look back at the situation in the market 8 years ago and it was dominated by Nokia and then Ericsson and Motorola were sat behind competing for some position. Motorola and Ericsson have somewhat dropped out to the market, although the former are looking to resurge in the form of the Motorola-Google partnership, and the latter with Sony. Nokia has just recently in 2012 dropped off the top spot.

The Most Purchased Phone in the World

The Nokia 1100 was the most bought phone in the world. It sold over 250 million handsets. To put that in context, that’s almost one handset for everyone in Europe. The phone wasn’t the most feature-packed, but it was strong, functional and was able to traverse emerging markets developing economies and the more economically established market of the world. Samsung also had several high performing volume phones and it was generally Nokia and Samsung that fought out for this title over the last few years. Samsung finally got top spot with 30% of all sales in 2012, compared to 24% in 2011. Nokia managed 24% in 2012.

Part of the reason for the shift in power has been the increased uptake of smartphones throughout the world. In 2011, 37% of all mobile phones bought were smartphone. This figure was 45% in 2012, up 8%. Samsung have done incredibly well in the smartphone market. In 2012, they released the Samsung Galaxy S3 and the Note II, which were widely acclaimed as superb of al phones. Perhaps these were two of the three best phones of the year. Certainly, they represented extremely successful releases for Samsung.

What Next for Nokia?

Nokia are certainly battling their way back. The Lumia 900 that was released in 2012 has been acclaimed by some the best value phone ever. As a smartphone on a budget, it provides incredible functionality and specifications at a super price. The Nokia Lumia 920 brought out a whole heap of innovation, including image stabilisation for the camera, super sensitive layers on the screen and a lot more. Again, the Nokia Lumia 920 has been received favorably by the public and critics alike, and perhaps marks a giant leap towards a bigger foothold in the smartphone market.

Nokia had fallen to below fifth position in the smartphone market and this decline could signal serious problems for the Finnish corporation; only time will tell whether they can overcome the fierce competition in the market.

Some other companies have chosen to diversify instead of stand and fight in the Western markets. For example, HTC have announced that they are releasing a £203 smartphone to penetrate the Chinese market. They perhaps understand the potential available in Asia with penetration rather low for smartphones at the moment and they see that chances of winning in the West as pretty low right now.

In reality, HTC have provided some pretty amazing phones, including the HTC Droid DNA and the HTC 1x. It is certainly going to be an interesting 2013 with innovation and production hitting new levels as the consumer base for smartphones increases and the profitability opportunities are even greater for the manufacturers.

Phil Turner has very little network coverage where he lives in Cork, so is stuck for choice when it comes to choosing a mobile.

4 tips for starting your own business

How to Save Money on Last Minute Flights

Hostoople – An Effective & Affordable Web Hosting Solution for All

Why Cybersecurity is More Important Than Ever in 2020