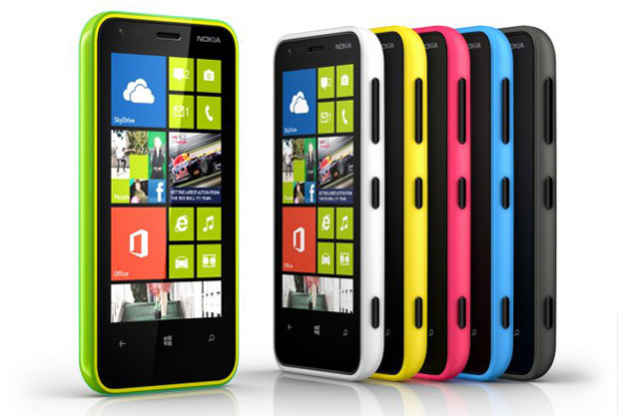 Nokia has added a new smartphone to its Lumia series. The new phone – the Lumia 620 is one of the cheapest Windows Phone 8 smartphones in the market and is expected to offer an alternative to the flood of Android smartphones in the entry-level segment. Let’s find out how the phone fares in our in-depth review.

Even though the Nokia Lumia 620 has been priced fairly low, you won’t be able to tell that by looking at it. It has a gorgeous design that can put to shame the best of phones. The phone has a dual-shot color construction, which is a combination of translucent and opaque colors, giving the phone a gorgeous and eye-catching look. It has a plastic interchangeable back cover which allows you to customize the color tone of the handset easily. Nokia has released the handset in seven different colors with either a matter or glossy finish. It’s compact, stylish and easy to handle with its dimensions of 115.4 x 61.1 x 11 mm and weight of 127 grams.

The Nokia Lumia 620 not only excels in the looks department, but it also packs in reasonable power in terms of internal hardware. It is powered by a 1 GHz Snapdragon S4 dual-core processor along with 512 MB of RAM and 8 GB of internal memory. The storage space can be further topped off with the help of micro SD card of up to 64 GB.

On the front, you get a 3.8-inch ClearBlack LCD display with a WVGA resolution of 800 X 480 pixels. It’s nowhere close to the HD displays found on premium smartphones, but if offers a good output with vibrant colors and excellent sunlight legibility. Above the display, you’ll find the secondary VGA camera for video calls and self-shots. The rear camera has a 5-megapixel sensor and is accompanied by a single LED flash.

Like all Nokia phones these days, the Nokia Lumia 620 also runs Microsoft’s Windows Phone 8 operating system with the Live Tiles user interface. First-time smartphone users will find the UI refreshing and easy to use. Nokia has added its own set of bundled apps like Nokia Music, Nokia Maps, Nokia City Lens, etc. in addition to the default WP8 apps like Office 2012, SkyDrive, Xbox Live and much more. Overall, the phone performs extremely well thanks to its dual core processor and the lightweight nature of the WP8 platform.

The Nokia Lumia 620 offers a 5-megapixel rear camera which has become a standard on mid-range phones these days. In well-lit conditions, the snapper delivers excellent images with sharp and rich colors. It also performs fairly well in low-light conditions but you’ll encounter some noise and smudgy details. As far as video is concerned, you’ll be able to capture HD 720p videos at 30 frames per second. Nokia has also added two innovative features – Cinemagraph and Smart Shoot into the camera’s interface for more functionality. Users can add more options by installing Lenses from the Windows Phone store.

The Nokia Lumia 620 lands with a 1300 mAh battery which is good enough to keep the phone running for a day and half with normal everyday use like phone calls, music play, push e-mail, messaging, social networking and web browsing. On a negative note, you won’t be able to access the battery which means you don’t get the option of using a spare unit in times of emergencies.

The Nokia Lumia 620 is an ideal choice for someone who wants to experience WIndows Phone 8 without having to shell out a fortune. In spite of being a budget phone, Nokia has packed in a respectable set of hardware and software functionality which should suit all kinds of users. Add to that, it’s stylish and unique look and you’ve a nice handset that provides great value for money.

Why You Need To Get Rid Of Your AdSense Now

The Significance Of CBAP Certification In Business Analysis

Keeping Your Business Afloat in a Sea of Social Media Platforms

What is Dark Fibre?