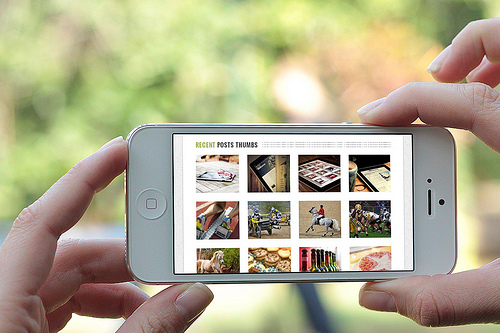 The technology world is a fast-moving one: it always has been and it probably always will be.  So when we talk about the potential for completely flexible devices in the future, we don’t necessarily mean fifty years down the line.  It wasn’t that long ago that eReaders burst on to the scene, porting libraries upon libraries of books to digital format and allowing heavy readers to carry their entire bookshelves with them in a pocket-sized (well, large pocket) device.  Before that we had the movement of music onto MP3 players and before that the mobile phone removed the need for a paper based address book.  The next step in the continuing move to digital media is less obvious to the average person but it could be the biggest thing yet.

Flexibility and Portability of Mobile Devices

The reason for eReader and mp3 players was to give consumers more portability.  Instead of carting around a selection of books and being limited to a choice of a few CD’s, people could carry everything in their bag; holiday reading is easy now, it doesn’t have to be a thin paper back any more   The next step, therefore, is surely greater flexibility.  While companies are developing flexible traditional displays, these do not give the same level of flexibility as organic electronics do and, possible more importantly, they still consume a lot of electricity.

First, a bit of background.  Organic electronics is the use of conductive polymers and small molecules instead of inorganic silicon and other materials.  The use of these carbon based materials means lighter, more flexible and cheaper devices can be made than using traditional inorganic methods.  One of the applications of organic electronics is the production of completely flexible displays.

What this means for the future is the production of highly flexible devices that consume tiny amounts of power and are not damaging to your eyes.  As of yet, organic electronic screens are just that: screens that can be attached to devices powered by traditional inorganic methods.  Advances in molecular computing, however, could lead to the development of completely organic devices that can be flexed at will and could even react to their surroundings much like a human would.

One thing that organic electronics holds as an advantage over traditional methods is the amount of space taken up: plastic electronic screens need no backlight capabilities and need batteries far smaller in size and capability.  With super computers and servers such as Google’s taking up massive buildings, the potential to storing all this information in a much smaller area is exciting.

Organic electronics still has a way to go to be able to compete with the best traditional screens when it comes to definition and video capabilities but as the adaptation to colour shows, they are advancing at a rapid rate.  Completely flexible screens can offer people devices that are that much more difficult to destroy, reducing both the cost of mobile devices and the impact they have on the planet.  Carbon based screen technology is taking a leaf out of nature in its design and producing something that no amount of silicon is able to replicate.

Neil Hund likes everything related to technology. When he is not searching for the latest news about technology he likes to be outside for a run.

How Valuable Are Consumer Reviews

5 People You Should Hire Before Starting Your Own Business

A Minimalist’s Guide to Setting up Your Online Jewellery Store

Things You Should Know Before You Do SEO

How To Help Your Employees Plan For The Future