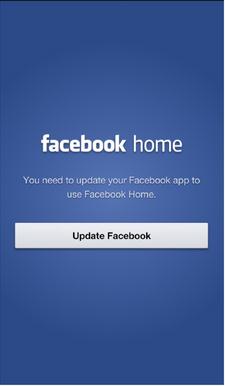 Facebook may not have the allure to many that it once had, but one thing is for sure, it has become a very integral part of our online lives and while you still have people who loath the service, the majority who use it, seem to be somewhat content as Google+ hasn’t seen any major up-tick in users since it’s much publicized launch last year.

Facebook wants to stay relevant and part of that strategy is getting even more involved in people’s lives. And what better way to do that then taking over the cellphone, the single most useful piece of technology most people own.

Facebook Home is more about connecting to the people you know and keeping up with them then it is about being cool. Facebook Home is not only a launcher, but it is a suite of apps as well that provides deep connections into some of Facebook’s most popular services.

Facebook Home is all about content and honestly when you look at it, it seems that some design cues were drawn from some very unlikely sources. The minimalism of the launcher is what we love most. It’s clean, fluid, fast and provides all the relevant information we need.

One of the things we like about Home is that it displays notifications in such an intuitive and simple way that it is hard to find fault with. The app launcher brings you back to the basics of what a launcher should do, help you find the app you’re looking for.

Another thing we liked about Home was the update to Facebook messenger which we admit we use quite a bit. Gone are the annoying switching to messenger and then back to whatever you were doing. Instead you have Chat Heads which pop up when someone sends you a message. You can then click the persons Chat Head and a widget will open up that you can use to reply to whatever that person has said. It’s a novel feature and we’re glad to see Facebook rethinking such small areas as this.

On the downside, we were more than a little disappointed that Facebook Home supports unlimited home screens, but no folders or widgets allowed. The idea here being that of simplicity, it would make sense if done on iOS, but Android is all about widgets and folders and the lack of this feature is quite annoying.

If there is one thing we have to say, Facebook Home turned out to be more fun to use than we originally thought. In the end though, it comes down to people. Are your Facebook friends that interesting that you would like to see their latest updates every time you unlock your phone. For us that’s not the case and the fact that we don’t have finer controls over what appears and what doesn’t is a bugger for us. But still, we could see ourselves eventually getting used to Facebook Home, albeit not for a long while.

Joseph is a Business expert with more than 10 years of Online and Offline Marketing. He also occasionally writes for Direct Edge.

What You Must Know About Online Marketing

Simple and Effective Ways to Improve Your Payment Funnel