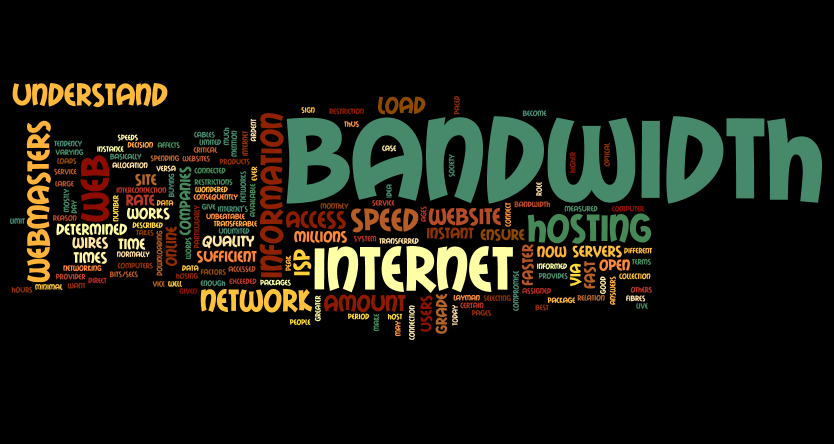 Ever wondered why at times you can open a certain website and it loads very fast and at other times you open another website and it takes ages to load? Well, it is all about bandwidth. In layman terms, bandwidth can be described as the speed at which one is able to access the internet at. In other words, it is the amount of data transferable at a given period of time, normally measured in bits/secs. Bandwidth is not only important to internet users but also to webmasters.

Before you understand how bandwidth works, you have to understand how the internet works as there is a direct relation there. A network is an interconnection of two or more computers and the internet, being a global system, has millions and millions of computer networks. The internet’s network is connected via a collection of optical networking cables and wires and in this case, bandwidth refers to the group of wires that connect servers to the network. Data is transferred from these servers via this network of fibres at varying speeds; which is determined by a number of factors but mostly the quality and grade of the wire (read bandwidth), the higher the quality or grade, the faster the speed and vice versa.

Most internet users have a tendency of spending so much time browsing information online or buying products and basically downloading stuff. The rate at which information online can be accessed is determined by the bandwidth your Internet Service Provider (ISP) has assigned to you. For instance, your ISP may limit or restrict the bandwidth of your internet connection particularly during peak hours or if they have exceeded their monthly allocation. Needless to mention limited bandwidth consequently affects the rate and speed at which you can access the internet. It is thus a good idea if you are an ardent internet user to sign up with an ISP which can give you greater bandwidth with very minimal restrictions.

As for the webmasters, bandwidth has a critical role to play when they are selecting the best web hosting service for their site (s). In the fast paced society that we live in today, it has become the order of the day that people want instant answers and instant access to information. It is for this reason that webmasters have to ensure that they host their site with a hosing plan that provides sufficient bandwidth. Today, web hosting companies offer various hosting packages where each has a different restriction on the amount of bandwidth available. You can even find some web hosting companies that are large enough to extend unlimited bandwidth at very affordable and unbeatable prices.

Now that you understand what bandwidth is, you can now understand why some websites load faster than others. As for webmasters, with the above information, you can now make an informed decision and ensure your website is hosted on a web hosting package that has sufficient amount of bandwidth that will not compromise on the speed at which your web pages will load.

Josh D. is blogger and writer. He currently writes for digbacklink.com, which is a backlink checker tool for webmaster.

Awesome Tips For Increasing Profit And Cutting Back On Spending

Buying High PageRank Domains | What To Take Into Account?

How To Help Your Employees Plan For The Future

Web Design: What You Need To Know