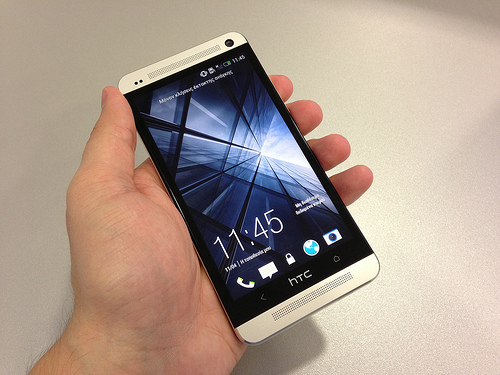 The HTC M7, which is also known as the HTC One, is the next in the series of top end flagship HTC phones.  But is it enough to compete with the Nokia, the Google, the Sony, the Apples, and the LG of this world?

Must Read: The Top 3 Smartphones On The Market

Must Read: WaterProof Android SmartPhones for 2013

Most of the information we have at the moment is from leaked materials and pictures, with the phone to be released very shortly.  So what do we know so far?

The Design and Features

We’re in for pretty stylish features on the M7; if the leaks are anything to be believed.  We’re in for premium grade materials and a solid display that borders on the edges of the device.  We should expect something between the HTC 8X and the HTC One X visually.

The new phone looks more angular but the corners are still rounded.  It appears we’re in for a almost bezel-less appearance, except for the top and bottom, which will be equally margined with a white background extending round from the back.  It looks sleek, stylish and sexy. It has been designed as a business phone as well as for social use.

The display looks to be a real stand-out part of the phone.  It is suggested we’ll get a 4.7-inch SLCD3 touch screen, featuring full HD 1920 x 1080 pixel resolution at a brilliant 468 PPI. Compare that with the iPhone 5, with 326 PPI, and you have a picture of a really, really impressive screen. Once again and as is common with many HTC phones, the build quality is solid and the screen does not give the impression that it is going to shatter the fist time you accidentally drop the phone

Inside the HTC One, we should expect a Qualcomm Snapdragon S4 quad-core chip processor with 2GB of RAM—some really high quality kit.  Of course, this phone will have no problem multitasking, playing games, and interacting with high level media.

Must Read: How To Take Better Pictures With HTC One

We expect the phone to be on Android and ship with 4.1 Jelly Bean.  We should also expect it to be updatable to 4.2 and later even 5.0 Android.

The phone looks sweet.  It looks strong.  It looks capable.  And it’s packed full of power. From a connectivity point of view, we should expect Bluetooth, NFC, Wi-FI, 4G, GPS, and a micro USB port.  Storage wise, there should be nothing short of 32GB but we may see some with 64GB inside.

This looks to be a really good offering from HTC. One that could perhaps further regain them ground in the sector after some disappointing performance over recent years. They really seem to have got to act together and be releasing phones to rival the best in the industry with high specification phones that look really hot.

Winning market share from Samsung and Apple is not proving an easy task. Consumers are becoming brand loyal and it takes real stand out handsets to break that loyalty. The HTC One, M7, appears to be one such stand out phone. I expect really strong sales figures from this one.

Phil Turner has found that every network is keen to offer him business phone deals. All he had to do was to ask and they knocked 10% off, for example.

The 5 Marks of Quality Business Signage

Acquiring the Best Deskphone for your Business

Scholarships and How They Can Help to Realise Career Goals

Use Social Media and Content Strategy for Better SEO