Internet.org is not a Facebook initiative only, it’s a revolution! Its Mark Zuckerberg’s inspiration to provide free seamless internet service with some basic websites to the mass who hardly access internet or don’t access in fear of over data charging.

INTERNET & OUR GENERATION | AN OVERVIEW

In this advanced spectrum of technology, everything is seeing advancement with the pace of a rocket. It has been just three decades or so since Internet saw its discovery, and within this much time, this network of networks has become our life. No one in this world can sustain without Internet in this present era. Internet is like the glue that bonds all the generations, all the world together in one bond. The question that arises here is if Internet is that mandatory, then why do we need to pay for it? Sunlight and Wind are equally important, but we don’t have to pay for these amenities whatsoever! Then why pay for Internet when you can get it for free?

Reliance Communications, in association with the biggest Social Networking Site Facebook, has launched Freenet, an initiative where the customers will be able to access any of the 33 sites free of cost, which means you won’t even have to pay for your data pack to access these sites. The method of this process is that people using Reliance SIM can log on to internet.org, and through this site can access any of the 33 sites. No hidden charges for data deduction will occur. It will be a plain deal where all the Reliance customers will be able to access these sites.

FREE INTERNET SERVICE BY RELIANCE | WEBSITES AVAILABLE ON IT

A few of these free accessible sites include Facebook, OLX, Manorama, ESPN Cricinfo, IBN Live, Wikipedia, etc. If we consider the present scenario then the fact is visible that everyone needs Internet, but no one is willing to pay such a huge amount for the data pack every month, especially the students who have limited assets and money, and have to afford a lot of things. For them, this initiative will act as a golden opportunity to save their money.

INTERNET.ORG ON RELIANCE | A GAME CHANGING MOVE BY RELIANCE TELECOM

With the advancing ideas popping into everyone’s head every day, this technology of launching the free internet can surely attract billions of people of the country. Call it an excellent publicity tactic by the Reliance Communications or a simple way of telling the world that we have a lot in store for our customers, a lot of people will surely be getting their number ported in order to enjoy the perks and privileges being offered by the telecommunication company.

INTERNET.ORG RUNS ON ANDROID| WINDOWS & iOS ARE IN PIPELINE

Though the application is available only on the Play Store for the time being, the company is planning to launch the apps for iOS as well as Windows Phone store soon in the future. Meanwhile, the users can simply log on to the website in their browsers and surf the desired site among the different options that are available from those 33 sites. Nothing will be charged as long as the surfer stays on those sites. The data pack will start running only if the person clicks on some external link prompting them to leave the site they were visiting. Even if they try to do so, internet.org will give a pop-up message that the user is leaving the free zone and will be charged as per usage on the next page, and asked if he wants to continue. So the user can decide as per his/her need. 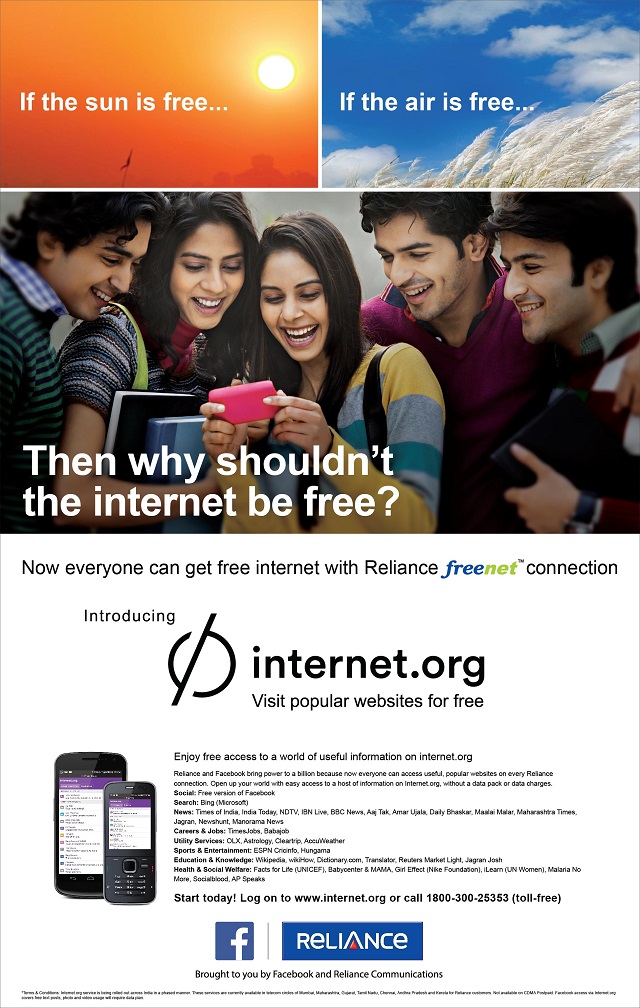 It can be said that this initiative was much longed and the days are not far off when the popularity of this service will be sky-high. There will be people from all over the country bragging other about the free Internet service that they will be getting. Though the service has yet been launched only in six regions of the country, but plans for the launch of the service throughout the subcontinents are on papers and will be executed. A positive response and overwhelm is being expected in the users by the company officials, and now it depends on the users how they rate this money-saving step by the company.

Factors To Consider Before Buying a Webhosting

Surprising Things You Don’t Know About SEO (Yet)

Points that you Should Consider in Network Solutions Provider

Does SEO Still Exist As A Standalone Service?

What You Must Know About Online Marketing