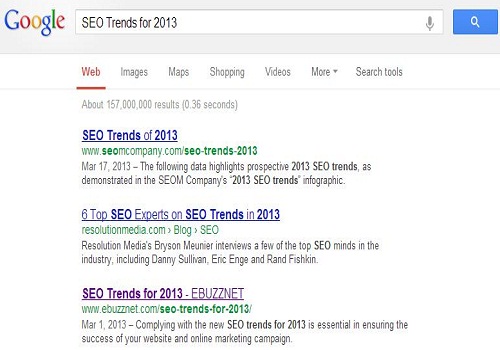 5 Websites With The Most Traffic In 2012

There are billions of websites available that serve every niche and category. Getting the most traffic is a difficult journey that can cost millions of dollars in advertisements and marketing. At the same time, most of the top websites are household names that almost everyone has heard of. These are the top five websites in terms of traffic based on Alexa traffic results.

While Baidu isn’t very popular outside of China since it only indexes Chinese websites, this is the most popular website within the Chinese borders. This website has more visitors than the international version of Google because it is known for delivering better results and supporting the full Chinese language without any problems.

This search engine currently has over 400 million websites indexed and there is a multimedia search for images, videos and more. While its reach is limited, this website is number one in China and number five across the entire globe.

Yahoo is an incredibly popular search engine that held fourth place in 2012 for the most traffic. While many people say that Yahoo is losing its grip on traffic, the fact is that Yahoo has always had many visitors and it will continue to serve millions of people in the future.

While many people like Google for its large number of indexed websites, Yahoo has more functions and tools for users to enjoy. There are sections for news, dating, images and more.

YouTube is the most popular streaming website in the world, and it came in third for traffic in 2012. This is another household name that is used to refer to most streaming websites. While there are many other streaming sites, most people will visit YouTube first if they want to watch or upload videos.

YouTube is so popular that users are uploading about 70 hours of video every minute. There is no other streaming website in the world that compares to YouTube’s popularity.

Facebook is definitely the most popular social network, but it has been vying for the number one spot for years. While it hasn’t been able to topple the most popular website yet, it is getting closer every year. Facebook has billions of users that are constantly posting new messages, images and videos for their friends to see. This website has connected old friends, started new relationships and helped fuel the businesses that advertise through their marketing platform.

Facebook has so many members that it would be considered one of the most populated countries in the world.

It might come as no surprise, but Google retained its hold as the most popular website in 2012. While Google offers very little in terms of functionality, it is still the most popular search engine on the Internet. People have gravitated towards Google throughout the years because it’s simple to use, the design is clean and uncluttered and they currently have the most websites indexed on their servers.

While many websites have tried, no one has been able to amass more visitors than Google. They have been number one for years, and it doesn’t seem like they are slowing down any time soon. Google is the most common search engine that online businesspeople focus on because it has the power to make or break businesses.

Jeremy Long is a software developer who loves to write about anything concerning computers or high-tech gadgets. Jeremy is also a contributor at Top Computer Science Degrees, a resource created to make finding the best education available as easy as point and click.

Why Are So Many Young Entrepreneurs Achieving Online Success?

How to Motivate Your Staff in 3 Easy Steps

6 Landing Page Changes That Will Make Your Conversion Rates Soar

How to Migrate your WordPress Website to The New Host?